Oh Death, Where is thy Sting?

My heart is shattered in a million pieces. I took a break from my blog because it started to seem like I was swimming in sorrow. I couldn’t catch a break from the heartache. I was waiting until something good or positive happened to write about, but the hard days just kept rolling in- like a bad sea.

You’d think six months have been long enough for the tide to turn, alas, it’s not in the cards. Since mid to late last year, my brother, John’s, cancer has grown progressively worse. He’s had cancer for almost the past decade, but only Josh and I knew. About 8 years ago, he lifted his shirt sleeve and showed me a round pit in the meat of his forearm. He could fit his entire thumb into the recess. I gasped and stated that he needed to get to the doctor ASAP. Unfortunately, he wasn’t much of a doctor-visiting kind of guy. He had no health insurance also, for the longest time. (Many years.) He confided in me that he had cancer (without having been formerly diagnosed) and I knew that he was right. He was always thin, but over these past few years he’d grown progressively thinner.

This past summer, he began having chronic pain in some of his organs and mistakenly thought it was his back, so he went to a chiropractor for treatment. Naturally, the treatment was unsuccessful. John was my best friend in the whole world. We were each other’s skin. I was his sister and his mother too. He was my everything. 😦

When he and I were kids, we made up two imaginary people called Mr. Zic and Mr. Zac. I have no idea why, but we would discuss them in full detail while jumping on our beds upstairs in our large home on Cherry Street. That kid followed me everywhere! Because our older siblings had their own friend groups, John and I were often left up to our own devices for entertainment. We were a mischievous duo!  We’d both sit on the seat of a 10 speed bicycle, with the kickstand keeping us upright, and when we counted to three, I’d kick the kickstand out from under us and we’d fall over with a loud crash and we’d just laugh and laugh. We thought it was the funniest thing.

He idolized me. (And told me that probably hundreds of times over the years. He told me I was his hero. I had taught him how to play the guitar and piano as well as taught him how to sing. He had no vibrato and it used to drive him bananas because he couldn’t vibrate his voice when he sang! I gave him singing lessons for a few years, off and on, and he became quite the singer. 🙂

I taught him how to draw, and shade his shadows and textures in with the pencil. he and I were virtually inseparable for our entire lives. I helped him get Medicaid (health insurance) last year as well as fought so he could receive SSI-Disability. I had just gotten him all set up with various organizations and he was only 3 weeks away from receiving his first disability check (he was set to receive $1,390 per month) when he grew worse than he’d ever been before.

On our last phone conversation, he had thanked me for helping him fight for his benefits, and he stated that he was basically retired, seeing how he’d be receiving financial support. he said, “I just need to keep myself alive and I’m basically retired!” He was so excited to have all of the stress and worry off of him. I was so happy for him too. It was rough sailing sometimes and it had been a very stressful 6 weeks, but I was so glad to be able to help him get set up with everything.

Our older siblings called John and I “The Little Ones”, and it was a title we relished and accepted with pride. It meant that we were in our own “secret club”, as we used to say, and nobody else was allowed in. Even as adults, we cherished one another with a special kind of love- rare even for siblings. That man owned my heart and he knew it.  We told each other we loved each other every time we talked. He was the apple of my eye…my baby brother.

My sweet, precious brother- my best friend in the whole world- passed on to the Other Side six days ago. Late Tuesday evening, on January 15th. I feel like I’ve been walking through a heavy mist since then. It’s all been so surreal. Nobody will ever take his place in my heart. I’ll always have a place that will never be filled with anything or anyone else. I’m going to miss harmonizing with him while singing “Seven Bridges Row”. It was “our thing”, as he finger-picked away on the acoustic guitar. We played Starrider (by Foreigner) at his Funeral/Home-Going, as was his request (per his son’s attestation).

I know he’s not suffering any more, and therein lies my comfort. He is with the Lord and our Dad, and my older sister, Cynthia, up in Heaven. I know he’s basking in Jesus’ Love and no longer walking in the Garden alone. And he’s saving me a seat. ❤ 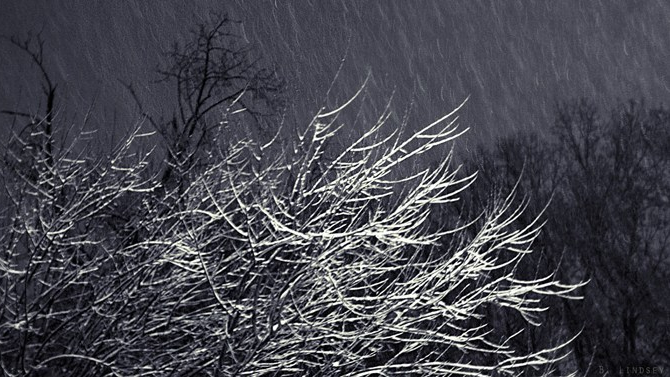 I had done everything I could to secure Life Insurance for my brother, to make sure his debts were paid and his children (and Mother) would be looked after when he was gone. Unfortunately, it fell through at the 11th hour and we discovered that his policy was useless: It broke my heart. I really do feel like he may have died an accidental death. He had had some complications shortly before he passed away, however, he seemed to be responding well to the chemo for a good bit there. Also, he had dropped 30 lbs. pretty quickly and looked like a virtual skeleton. There was literally no meat on his bones and his skin clung tightly to his ribs bones and clavicle. However, despite his state at the time, he’d been given a prognosis of at least another 1 to 2 years (of time left) with the help of chemo.

He was given two separate Fentanyl pain patches: One for 100 mcgms prhr (100 micrograms per hour) and 25 mcgms prhr  (so, 125 mcgms prhr- total) + he still took Oxycontin in pill form for breakthrough pain. If he weighed enough to withstand that amount of pain medication, that would be one thing. But I don’t think he had enough weight/volume/mass to hold up to the powerful drugs he was given. I truly believe he was over-medicated and the hospital and doctors will chalk it up to cancer (only). I’m still in school and i’m still working on my Master’s degree: In another year, I’ll graduate with my Master’ in Psychology and Addiction Counseling. It’s been a long road, but I’m well-educated in drug-speak, particularly pain meds. and the like, given today’s drug climate and the rate of overdoses in the united States. In other words, cancer patients are used to taking high doses of pain meds, understandably. And for the most part, that works well for them.

However, when their bodies are too frail and thin to withstand those high levels of pain medication (via a transdermal patch applied directly to their skin- lasting for 72 hours at a time), it is so easy to accidentally overdose. Due to their medical condition and diagnosis, no one bats an eye and it’s written off as “natural causes”, but in cases of overdose, it’s not a natural cause at all, but accidental death due to either overdose or adverse reaction (which are two different things altogether). Also, he had just been given a feeding tube a few weeks before he passed away and he seemed to be responding well; he’d told me that he’d gained 5 lbs.

He had had some trouble with acid reflux and his fluids becoming problematic somewhat, but the physicians were able to remedy the situation.  He seemed to be doing a bit better when virtually overnight, he developed a hoarse voice very quickly. He was gone several days later. The hoarse voice is another reason I think he may have been over-medicated. When an individual overdoses on opiates, they develop a hoarse voice. That’s one of the indicators of an overdose, as is constipation, nausea (and vomiting), all of which he exhibited in those last few days. All of it- when factored together- looks very much like a possible overdose via accidental over-medication. it happens more than people know. He would not have lasted a great deal longer regardless, but we all felt like he had at least 6 more months left, easily. My niece put it so lovingly when he did finally depart, “He slipped away in the night to be with the Lord.”

I’ve taken it upon myself to start a fundraiser/Gofundme Campaign to try and raise $10,000 for my brother’s burial/funeral costs. My family and I are not affluent and without donations, we have no idea how we will secure burial money for him. If you’re reading this and would like to contribute to my brother’s funeral costs, please do follow the link below and you can make a donation. I can’t thank you enough, and for those of you reading who may have already given something, thank you SO much- it means so much to my family and me.

Thanks again, and God bless. ❤

I’m ecstatic. School is OUT. Depending on whether I’ll be eligible for Financial Aid (due to the recent car accident), I’ll either return for the spring semester in 2013, or the following fall. I can hardly believe I’m only 3 classes away from receiving my degree in Behavioral Sciences and certification in Substance Abuse. This past year has been pure insanity!

Now that my finals are over, I feel myself immediately exhaling. Laughter comes quickly. I had forgotten what it was like to laugh!

In my mind, I see flowers. They’re actually coloured. 🙂

I’ll be able to focus on my art now: photography and music/songwriting.

It’s 2:23 a.m. and J is at the stove cooking.
Brianna took Brian and myself out to eat, and then we went to the bookstore in Kentucky.
Brianna bought me a photography book, wearing her little elf hat (bright red and green), jingle bells attached, with long grey gloves- sans a coat-we looked a sight.

Brian was very sad still- his turtle, Alfred, died today. He brought him to me in his little aquarium; Alfred’s head hanging limp in the water.
He smelled pretty bad too. I told Brian to follow me, and we walked out to the woods to bury him. It was biting cold.

I was impressed and touched that Brian chose a location high up on a hill, instead of right at the edge, conveniently closer to the fence. Instead, we were slapped in our faces with branches and bramble, trudging up the hill, but again, was very touched that Brian went the extra mile for him. We buried him there and took a moment.

On the way home, the rain turned to sleet. 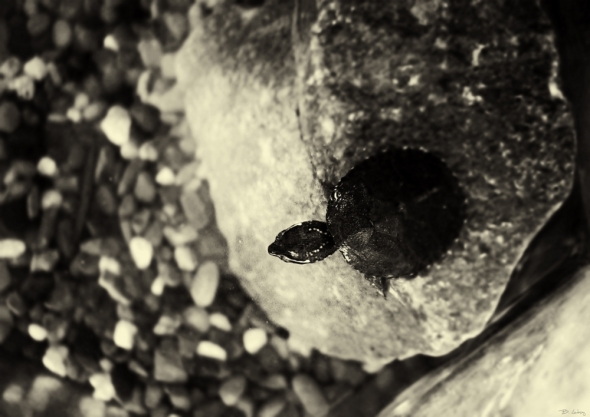