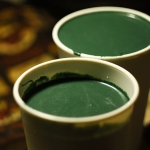 Josh and I have created our own spirulina smoothie. We call it: Green Velvet. It’s thick, creamy, delicious and ultra-filling. We’ve recently picked up a new blender (as well as a juicer), and wanted to make our own healthy smoothies. We winged it as we went on, but it exceeded our expectations and despite it looking a bit like paint, was really quite good!

We ground our organic oats in the coffee grinder- same with the cocao nibs- and added it to the mix. It’s wholesome and nutritious with a deep, earthy flavour. In short, it’s fantastic.

Josh and I are down a total of 27 lbs. so far (20 for him, 7 for me) without any type of exercise at all (well um, except for sex, of course), but we’re wanting to sign on with our local gym soon. We’re beefing up our smoothie station as well. I’ve just put an order in with Amazon for Ashwaghanda powder, macu macu powder, maca powder, goji berries, spirulina, protein (plant) powder and a few other super foods.

Starting the year off right. 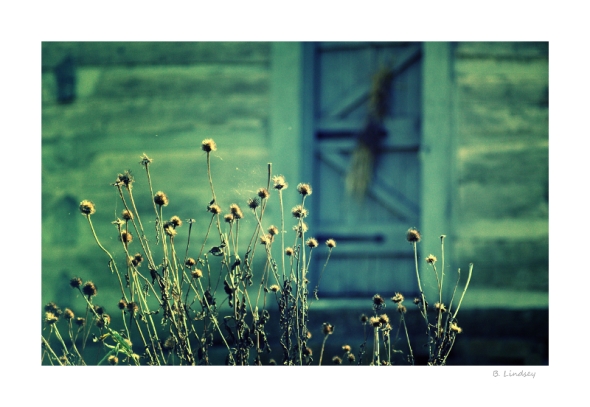 Josh and I have been making some serious changes to our lifestyles. We watched the Netflix documentary What the Health two weeks ago, and were absolutely livid at how the animals are treated as they’re “super-raised”. Most all meat manufacturers (and “growers”) admitted that they pack their animals in so tightly that they can barely move around, and it’s not uncommon at all for many of them to be inundated in their own waste. In fact, many of them stand in several feet of their waste, and many of their neighboring animals were sick and diseased; those who weren’t sick and dying were already dead.

Watching that document opened a dialogue in which we discussed not only animal cruelty and our desire to omit all meats from our diets, but our desires to take better care of our bodies. I saw videos of people who were fighting cancer who decided to switch to a plant-based diet. After consuming a plant-based diet consistently for a year or so, one particular woman was able to eradicate cancer altogether. Today, she is healthy, happy, strong, and cancer free.  Also, we learned that when a person eats meats- especially the unhealthy kinds- there are lipids and certain compounds that actually attack the arterial walls; not unlike a dart which sticks in the side of something. Over time, that dart changes the molecular structure of the artery so that it thickens up, ultimately causing it to harden.

Josh and I decided together that we would cut out all meats from our diet. Also though, we learned that milk manufacturers, and paid dairies, add hormones and other awful things to cow’s milk so that it contains puss and hormone-packed mucus that also contributes to unhealthy fats attacking our arteries. (Not to mention, milk does a number on both of our internal systems.) So, we tossed out milk as well. But then we learned that 1 egg yolk is equal to 5 cigarettes in the bad cholesterol department. So, bye bye eggs! As long as we’re cleaning house, we wanted to cover all of our bases.

That pretty much puts us level with vegans. Except, vegans don’t eat honey- seeing how honey is considered “animal-based”. But honey is where I draw the line. I consider raw honey somewhat of a super food, seeing how our it’s fantastic for boosting and protecting the immune system. Nope. Honey and I will never part. Besides, I don’t like to be labeled, and as far as I’m concerned, Josh and I are “plant-based” in our diet choices. We can eat anything we want, at any time. We just choose not to.  And for me, having that allowance open at all times, but choosing not to will only continue to fortify our resolve.

We both feel so much better and far more energetic! It makes perfect sense, really. Eating meats (with all of its unhealthy fats) attack not only the arterial walls, but the brain itself. It’s not uncommon for individuals to experience a “clearing of the mind” when going Veganish, and that clearly happened to us as well. We’re alert, and focused and have even noticed that looking at lights and their auras seem so much brighter too. Everything is brighter! Josh has lost 10 lbs. in only two weeks and I’ve lost 7. We’re not even exercising yet, apart from the occasional mile walk at the park with our dogs, or the trip down to the river on the rocks. We’ve decided to join a gym, however, and are looking forward to starting that.

School is going terrific. I’m halfway through my 2nd semester. My two classes for now are: Addiction Counseling Theory and Practice, and Psychology of Addiction. Grad. studies are much different than I thought they would be! This stuff is not easy.  I’m seriously giving some thought to obtaining my R.N. license in Nursing, after receiving my Master”s in Addiction Counseling, simply because I’m thinking about having a dual-license. I could work in Rehab as a nurse or an addictions counselor, but that’s so far down the road. And, as it goes with other things, that may not pan out at all. It’s all part of tossing ideas around until it gels and feels right. For now though, I’m focusing on Addiction Counseling.

I would have written here again sooner, but it was the holidays and Josh and I had to endure yet one more year of my sister inviting the entire family unit to her house for Christmas and purposely leaving us out. This has been going on every year for many years now. I’ve told her on more than one occasion that what she’s doing is extremely hurtful. It’s simply neither fair nor “right” to host the most family-focused event of the year at your house if you and another sibling are not speaking. What hurts the most, however, is that my mother knows that it cuts our hearts out, yet she continues to go over there- year after year- knowing that Josh and I are not welcome. It would have helped, tremendously, if my Mom chose to have the family gather at her house instead. That way nobody would feel left out and all would feel welcome, but that didn’t happen, so, we’ll forge ahead, Josh and I, alone.

Close the door and move on.