A Very Special Thank You

Yesterday was such an awful day for me:everything was so dark. Ever the optimist, I know that these times are cyclic. They’re bound to happen and they’re inescapable but they won’t last forever. I hadn’t felt so depressed in a such long time. Since Chance (my dog) ripped my ring finger open, I’ve had to hand-write all of my notes in my classes. Today, I took 33 pages of notes (33!) on dissociative disorders, fugue, and the predispositions of unipolar and bipolar disorders for monozygotic and dizygotic twins. (33 pages!)

Last week it was 30+ pages on schizophrenia and psychotic disorders, and that’s just one class; there are three others. So, life has been a blur of mania and depression and lots of it (note-wise). It’s really no wonder that I’ve been a bit depressed, seeing how I haven’t seen the outside of my bedroom in days and I’m consuming 30+ pages of hardcore psychiatric disorders daily. The bright side is that I’m retaining 90% of what I’m studying and don’t have to look twice at my notes. Once they’re written down, the info. is locked in, pretty much. But still, yesterday was horribly black.

Until, that is, I received a knock at the door.

There was a special delivery and he brought me these! 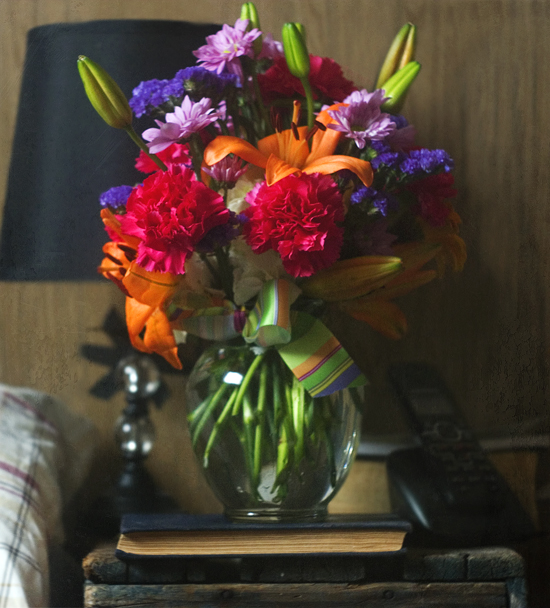 I knew immediately who they were from. My very special friend “Y”. (No, she’s not a spy, but she is fiercely private, just as I am. So respectfully, she’ll remain anonymous.)

And then my bitter scowl turned into this! (That Proactiv is good stuff, man.)

I figure that’s the least I owe you, Y. 🙂 (And yes, those are your flowers in the background.)

Nobody’s ever sent me flowers before. (I know!) Thank you a million times over. You’ve been there for me over the years more than anybody else. You’re a GEM and I love you dearly. My icky clouds have passed over and I’m feeling right as rain again. (I had no idea I could be bought with flowers. I’m so cheap!)

Thanks again so much for showing that you care. Love you. xo

…things have been so hard. I don’t like to complain, so I try not to, but really, when I look at the string of events I’ve experienced in just the past 6 months, it’s really quite incredible that I’ve managed to remain in college. Let’s recap:

a. The irreparable breakdown of my off again/on again relationship with my former fiance
b. The irreparable breakdown of my car
c. The great internet apocalypse (and subsequent loss of my electricity/phone/and Netflix)
d. Picking up a vile bacterial infection by “the cougher”
e. Missing my own graduation as a result of a systemic infection and U.T.I (and again, “the cougher”)
f. The death of my beloved cat, Carl
g. A severe burn to my belly
h. A bone-deep dog bite to my right ring finger
i. Unspeakable stress from tackling my 5th academic year

I’m a tough cookie, believe me. I can handle pretty much anything that is thrown my way, but sometimes, it just starts to get to you. Little by little. Drop by drop, and in the end, it’s not the catastrophic tsunami that wrecks it all, but the water drop that hangs on for a second too long.

I’m feeling severely depressed. My emotions stay on a fairly predictable plane, daily. I’m not what could be classified as “ecstatic”, but I rarely get depressed either. Tonight, I’m black. So black, I’ve contemplated quitting school, bolting my door, and retiring early. I’m supposed to do 30 hours of internship at a drug rehab/Behavioral Health facility of my choice and I don’t even have a freaking car! I really wish my former room mate (name withheld) would give me the money he owes me already. He owes me thousands of dollars and he knows how hard things have been for me. He hasn’t given me a cent- I would never do that to anybody. How could he be alright with taking advantage of somebody like that? He’s owed me a significant amount of money for almost a year now. It’s quite pathetic.

I’m tired. And tonight, I’m having a bit of a meltdown. I can’t always be the strong one. I want to have a good scream or break something but alas, that takes raw energy and I have none of that at the moment. Truly, I want to quit. I want to quit everything, but I’m not a quitter, so that’s out. I have enough alcohol here for 10 New Year’s parties but I don’t like to drink, so…that too is out. I’ve had enough psychology for the past few years to diagnose and assess 100 people, but I fall short assessing myself. I miss my daughter, and I miss my son already.

Brian was over for the weekend with his girlfriend, Amanda. I let them take my room over when they’re here: my wide screen monitor doubles as a mini-theater, which can be swiveled around easily. They left only yesterday but already this places feels like a crypt.

I snapped a few pics of them. They’ve been together for almost a year now. They’re absolutely adorable together. :0)

Ghosties (snuggling in the snow) 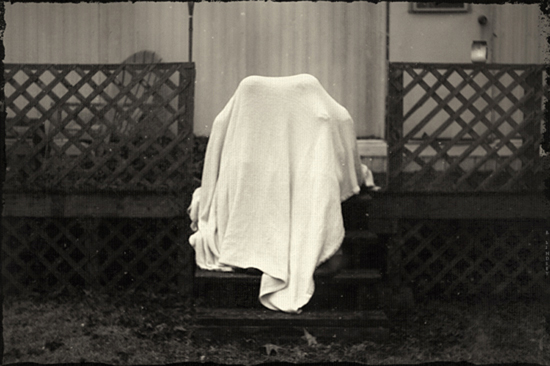 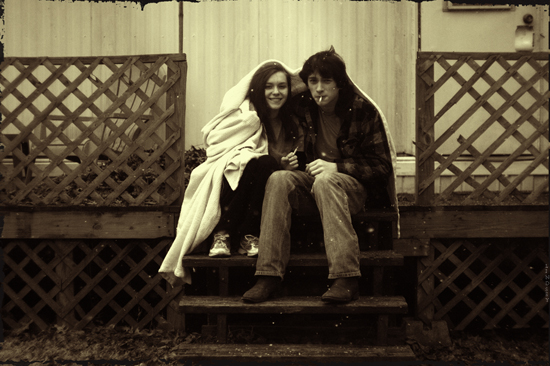 Recently, I sold a print on Redbubble (a pic of my former pet: Sketch titled Black Beauty) and the mystery buyer chose to remain anonymous. If you (the buyer) happen upon my blog, thank you so much for the purchase! It really made my day. :0)

I hope you enjoy our Sketch as much as my children and I have. 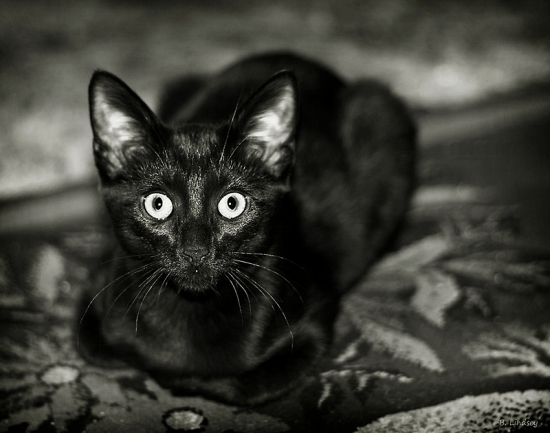 I can’t begin to describe the hell I’ve endured this past week. I’m sure by now my professors think I’m making up stories, but nope, this really is my life!

Before Carl (our cat who was ill with Feline AIDS) died last week, he tripped me at the stove as I was carrying a skillet full of boiling water. Rather than step on Carl, I took the hit- straight to the stomach.

It’s doing better now, and I explained to my professors that I have a severe burn on my belly and need a few days to get myself together. But that’s the good part!

Then my dog, Chance, bit my right ring finger when my son and his girlfriend were over (he was momentarily confused) and when I went to pick him up and move him, he snapped on my finger: 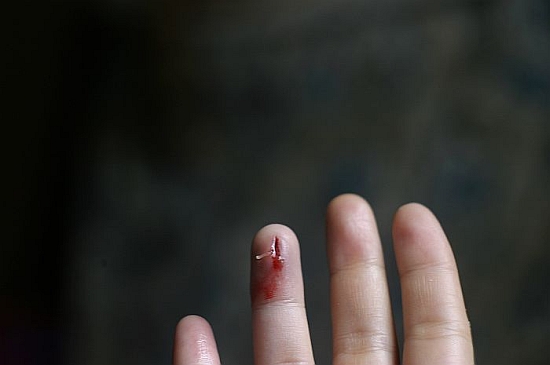 I should have gone to the ER but I don’t like needles, so I chose to care for it at home. Plus, it doesn’t hurt that I was a top med student at one time, so I’m right up there with a home nurse. (Sort of.) I understood going in, that there are two major infections to watch out for with a cat or dog bite: staph infection and then there’s the reeeeeally bad one- Pasteurella. People have died from that crap!

I took my chances. Already, my immune system is very tough: I take probiotics daily and a vast array of herbal supplements and have for years. I know that the first 24-48 hours is the most crucial time to watch out for signs or symptoms of a systemic infection. By the second day, I was already experiencing mild delirium, nausea, tremors, chills, night sweats, and a headache. For me, the headache bothered me the most, because I have a history of migraines. If I didn’t knock that headache out fast, it could grow into a migraine. Which is exactly what happened. And then came the vomiting. I couldn’t eat or drink anything for two days.

This went on for a few more days and I finally fell into deep sleep, after my Mom brought over some Phenergan and was able to knock me out, mercifully.  I wrote my professors explaining the situation (the severe burn my cat gave me and the bite my dog gave me) and realized how ridiculous it all sounded, so I sent pics too.

Yesterday was the first day I was able to actually get out of bed; I’ve spent the past two days catching up on schoolwork- 7 assignments and a massive Abnormal Psychology exam, but, I’m caught up again. I can only type with two fingers still, but at least I’m back at work and in the land of the living!

I walked into the living room this morning to make coffee, and noticed that our long time cat, Carl, wasn’t breathing. He was diagnosed with feline AIDS last summer. Many times when a creature dies, if it’s in pain, it will draw its knees in to its chest in the fetal position. Carl was outstretched and looked as if he were merely sleeping, so I know he hadn’t suffered. He ate dinner last night with as much excitement as he always does. Rigor mortis had already set in and his paws were cold, so I know that he died sometime in the night.

I said a quick prayer earlier and thanked God for allowing Carl to be with us for as long as he had been. Still, there’s just no shaking this sadness. Brianna laid him to rest just past these frozen leaves.

SP/Cross made from popsicle sticks and dental floss
Circa: 2009