“This is Dad, Calling from Heaven.”

I had a strange dream the other night. My Dad called me on the phone. It sounded distant, understandably so- he passed on to Heaven a number of years ago.

“Birg,” he said. “This is Dad…calling from Heaven.”

I was shocked when I awoke. I thought it was utterly cool that he would call me from the Great Divide. 🙂 The Bible makes mention of a banister of Witnesses leaning over Heaven. God gives these particular Saints permission to cross over from time to time to witness to us that are still here. My Dad told me that himself, many years ago.

“Come on! You can make it!” They say, to encourage us.

I dream of my Dad all of the time. He comes to me many times per year, ministering to me, sharing Scriptures and such- we still have a great time, and, truth be told, you can call them “dreams”, but they’re more than that.

I had such a dream a few months ago. Me and my (extended) family were all standing on a high mountain. All of us. My Dad was at the very top and he was turned around, looking back over his shoulder. He looked like a lumberjack and was about 25 years younger. He wore a big smile on his face and was waving his hand to follow him. I knew what the dream meant, for he taught me to interpret dreams many years ago.

It was Christmas day when they took my Dad off of life support. The doctors wanted to see if he would make it through for the next few days without it. Naturally, everybody was gathered together for Christmas festivities, but I stayed at the hospital all day with him. I couldn’t bear for him to be alone on that day. We had a great time, given the circumstances. I’d already been told that he’d been muttering things incoherently because of the medication and such. But no such thing happened on that day.

Instead, he shared two Scriptures with me from the KJV and was as clear as a bell doing so. One of those verses was Titus 1:2-

Paul, a servant of God, and an apostle of Jesus Christ, according to the faith of God’s elect, and the acknowledging of the truth which is after Godliness;

2 In hope of eternal life, which God, THAT CANNOT LIE, promised before the world began;

And he went on to share with me the comfort in knowing that God cannot lie, does not lie, and will not lie. He took great comfort in the fact that God keeps all of His promises and will absolutely save us. He could accept that he felt like “the chief of sinners” much of the time, but God would ultimately keep His word and deliver him. And so it was.

I didn’t know how much time I had left with him that day. We were best friends at the end, and had been for years. We’d been through so much hell together! But such GREAT forgiveness. And, the Word does say that with much forgiveness is much love. Those who forgive the most, love the most: he surely taught me that.

I hugged him then, and fell on his neck and told him that it was a total privilege to be his daughter on this side of Heaven.

And there was nothing more to say.

I thought that there would be a big gap after he died. But really, we’re still very close and “death” only stands as a doorway that he crossed through into LIFE. Even so, I’m glad he takes time out of his busy schedule “up there” to still give me a call. :0)

For Shreya. xo
One of my short stories from several years ago.

Her fingers felt like two hot stones that had soaked up the angry sun. The sweat was gathering on her back and Ellie knew that she was racing against the clock. She’d been out there for two hours now; digging, planting, and turning over the dry, crusted earth. She wiped her brow, smearing dirt on her face; mixing it with the sweat that ran down into her ear. There wasn’t even a hint of a breeze.

“Good thing too,” she thought.

A gentle breeze would only have lulled her into the hope of being comfortable. She wasn’t much of a gardener, but her mother (and her mother’s mother) had toiled away in the burning sun, just as Ellie was doing now, and so she felt it was her womanly duties, if nothing else, to keep the grounds. It was her heritage. Her land now. Her large fingers tore at the soil and she carefully placed each small stone that introduced itself, into neat little piles. The smile that was beginning to form at the corners of her mouth, was evidence that she was quite pleased with herself. She squinted and stared up into the sun. The lemon-yellow glow, radiated out from the heavens, wrapping itself around her very heart it seemed. Panting, she let her eyes drift across the canvas of the sky, and thought of the tangy lemons in her basket over the stove. She would take a few, squeeze them tightly into a pitcher (after cutting each in half), careful not to let the seeds fall in. She’d add a few cups of sugar (she could practically taste it now), rushing to the pit of her stomach as if it too were trying to get away from the burning heat.

Ellie wiped her hand on her brown, faded dress. You know the one. A rip there at the hem from rushing through life, month after month; chores and endless lists to check off. A button- missing in the back- directly across from her burdened waist; proof that she’d rewarded herself bountifully after each carefully planned meal. The floral pattern had been beaten away by the unforgiving sun, year after year of hanging out those old stained linens. Why, they must be forty years old by now!  Ellie wasn’t aware that she’d drifted off again; her eyes fixed to those linens as if it were the sheets themselves that took her back to her Jonah, and the sound of his harmonica…and her laughter. But Jonah was gone and so were the years.
She wiped her eyes, again streaking dirt across her lid. Her parched mouth brought Ellie’s eyes away from the sheets and back to her tired old hands. Lemonade. Ellie put her packages of seeds next to the neatly stacked stones, and tried to rise. It felt as if the sun had exploded in her chest; her breathing, coming in heavy gasps, and she fell to the ground, scattering the stones as she went. Ellie closed her eyes, for the sun was blinding, and she pulled at the grass, reaching for something (for what, she did not know) something to feel connected to. Even with her eyes closed, she felt the shadow move over her face. Ellie opened her eyes. The sun was hiding behind the peculiar man, causing a cool shade to fall on her. For that, she was grateful. The ripping pain in her chest, seemed to have vanished, and Ellie was wondering who the stranger was that stood before her.

”Can I help you Ma’am?” he asked kindly.

Ellie shook her head, as if to say no, but then nodded her head in confusion. The glow of the sun seemed to make him glow as if he too, were indeed part of the sun.

”Y-yes…thank you….sir….,” she answered; her voice trailing off, barely above a whisper. She looked up and into his eyes. How could it be? Her Jonah was gone, and he looked nothing like him, but his eyes…she could almost be certain they were Jonah’s. Yes. She was absolutely certain that she’d seen them before. She reached up, placing her hand into his waiting one. The man pulled her up; smiling and nodding gently as he did and Ellie let out a breath of summer air, returning his smile, and gently squeezed his hand. The sight of her linens, dancing happily in the breeze, caught her eye. The gentle wind kissed her hair, refreshing her for the first time in months. She could hear the faint trail of a harmonica playing, as many do in the country, and still holding the man’s hand, Ellie looked around to take stock in all that she had to be thankful for. This is the house that sheltered her through the many seasons of her life. The garden there, was her daily companion; patiently teaching her how to grow.

”Are you ready?” asked the man.

Ellie paused, and looked back at the scattered stones. Lying next to them was the body of Ellie Parkins. Ellie saw herself, but felt as if she were looking at a stranger. Dirt streaked her forehead, and a faint smile was still painted on her mouth. Hanging on the clothesline, were those white linens, which also seemed to glow with the strength of the sun shining through them. Ellie looked up at the man, and with one last sigh, she pursed her mouth together and nodding at her new friend, walked toward the shining sun… 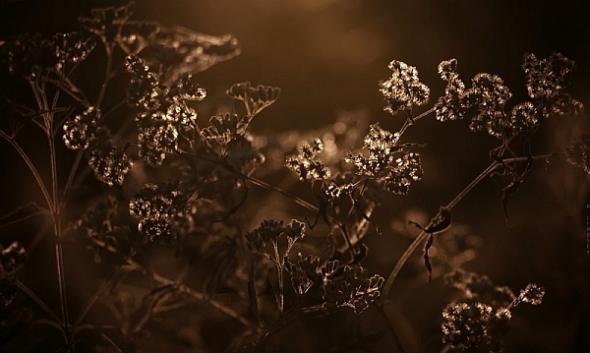