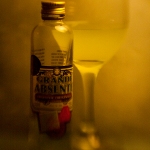 So Josh and I finally decided to try Absynthe:

It’s a liquor that was banned for almost 100 years due to its psychoactive properties (which are brought on by the wormwood that it contains) and a curiously high percentage of alcohol by volume. In other words, it’s a rich man’s moonshine. You’re supposed to drizzle cold water over a sugar cube into 2 oz. of absynthe until there’s a  1:1 ratio of each. We’d never tried it before so we decided to test out a small bottle- lest we find ourselves running naked through the streets after giving it a whirl.

After the solutions are mixed, the lime green colour gives way to a milky white- opaque sort of greenish concoction that’s quite pretty. We really didn’t have enough to judge accurately, but after we’d both had 2 oz., we were pretty laid back. It didn’t make us feel tipsy at all in an alcohol-induced way- but we were strangely subdued. (Josh took the gorgeous pic above with the Lensbaby.)

I’ve been MIA from my blog for quite some time. I haven’t had much to say, but really, I’ve been on a serious sabbatical since graduating in May! And this will be a short entry due to my raging migraine at the moment. (Nothing to do with the absynthe. It’s hormonal.)

I pictured my extended vacation (before graduating) and I saw myself doing a lot of lounging around, catching up on Netflix and just being a glorified beach bum (sans the beach + a dirty river instead). In fact, I’ve done very little of that. I’ve already opened up my first Etsy shop- selling anything and everything that Josh and I make art-wise. He makes clay African heads which are totally badass and also some pretty freaking awesome computer chip earrings and necklaces made from old motherboards. I’m so impressed with his creativity. 🙂 We’ve worked super hard on opening the shop, gathering inventory, and working on our packaging/branding. I won’t announce it here- not yet- because we’re not where I want it to be yet. We’ve only got 15 items listed, so we’re not quite ready to roll out a grand opening. Soon! Also, we’re working on our 2nd shop, which will be nothing like the first one. The first one is a catch-all for anything that strikes our fancy, but the 2nd one is deliberate and focused. So, we’ll be announcing both shops at once in the next few months. And, as much as I hate FB- with every drop in my body (and haven’t been there in 6 years)- I’ve decided to rejoin so that I can do my necessary PR and networking for our shops. Without social media, any business is dead in the water, and you have to PR the shit out of something if you want it to sell- it’s just that simple.

So- in several months, we’ll be linking our two shops here, and also on Facebook and Twitter and all of that good stuff. It won’t be a “fan” account at FB, it’ll be my own name and personal account, but it will double as a PR machine for new pieces we add here and there.

We’re pretty excited about this new direction we’re taking. I knew I wouldn’t be able to freaking lay around doing nothing! That doesn’t really exist in my world.

More on everything later. I currently have a rabid (invisible) critter gnawing at my head and the only thing that’ll help at this stage is to fall blissfully into unconsiousness. So, be well all. I miss everyone. x