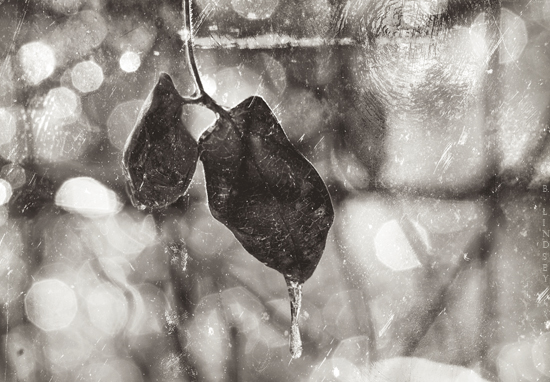 I walked into the living room this morning to make coffee, and noticed that our long time cat, Carl, wasn’t breathing. He was diagnosed with feline AIDS last summer. Many times when a creature dies, if it’s in pain, it will draw its knees in to its chest in the fetal position. Carl was outstretched and looked as if he were merely sleeping, so I know he hadn’t suffered. He ate dinner last night with as much excitement as he always does. Rigor mortis had already set in and his paws were cold, so I know that he died sometime in the night.

I said a quick prayer earlier and thanked God for allowing Carl to be with us for as long as he had been. Still, there’s just no shaking this sadness. Brianna laid him to rest just past these frozen leaves.

It’s a sad day here. Perhaps today will be brighter than yesterday.

Carl has “kitty AIDS”: a feline autoimmune deficiency disease. It’s not exactly the AIDS that is the problem as much as the cat’s compromised immune system, which allows other bacteria and viruses to attack its systems.

Brianna noticed that Carl has been turning yellow on his skin and inside of his ears- jaundice. He came in from a fight recently with a gaping wound on his head, which later became infected. We cleaned it daily with peroxide and eventually applied Neosporin, which helped. It’s looking much better now, but he’s lost a good bit of weight and has developed kitty-bulimia. He’ll overeat, almost always, and regurgitate immediately afterwards. It’s hard to say if this stems from a behavioral or physiological process. Brianna rescued him two or so years ago; he’d had a fairly hard life beforehand, always scrapping for food.

We took him to the vet yesterday and the vet blatantly shared with us that Carl should be taken home, given the best soft food available, and “made comfortable”. I know what that means. When my Dad was dying in the hospital, the doctor was farting around with his words, so I pulled a nurse out into the hallway and asked her to shoot me between the eyes. She told me to take him home and “make him comfortable”. It was her hard stare that solidified the impact: we both knew what she was saying.

Brianna has been crying her heart out. Carl is her best friend! He looks like a total bruiser but really, if you give him a small piece of steak, he won’t just take it from you; he rubs his head on your hand to show his appreciation, then he gently takes it. He’s a gem.

We were told by Dr. Strong (the vet) that there are a pack of cats in our area that have feline AIDS: it’s transferred through a saliva to blood interaction, or blood to blood, or mating. Often, cats who fight will transfer this deadly virus to other kitties. It doesn’t transmute over to humans, however.

We’ve quarantined Carl; he’s staying in Brianna’s room at the moment. The vet donated a $56 antibiotic shot from her own Angel Fund Foundation- it was hard to hold back the tears on that one. I’m going to make her a thank you card, using Carl’s picture.

Although the prognosis looks fairly grim, as Dr. Strong stated, “There are always miracles…”