I can hardly believe I’ve had this blog for four years now: 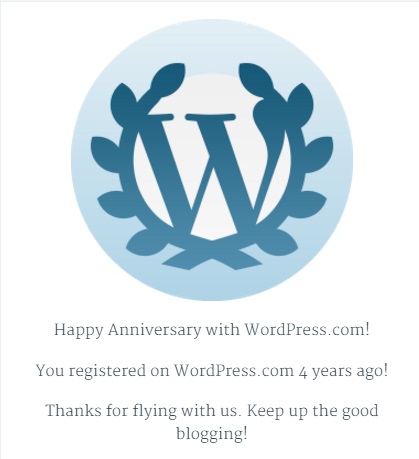 I originally came here because I’d seen another photographer with a “Last Day of the Year” post and she’d had a gazillion pics up for that whole year’s compilation and wanted to do the same. Somehow, I’ve morphed from being “just a photographer/artist” to being almost nothing but a full-time psych student. I set out to make my blog mostly photo and art stuff, but I’m a mouthy dame with a lot to say and needed an outlet: this was perfect.

The first handful of years I’d posted mostly personal things; lots of informative posts and migraine-related stuff; family stuff, etc. But after so many postings, I’ve sort of grown a bit protective of my privacy, seeing how I’ve discovered several “overly-enthusiastic” followers (stalkers) who watch my every move, which has become…a bit more than unsettling. I don’t have a Facebook page, and I’m certain that if I did, they’d be hunting me down on there.

One of my most devoted followers (stalkers) resides in California and owns an art site. He’s been shadowing me for years now and is more than a bit obsessed with me, so say his own attorneys! It’s a bit creepy.

Alas, he’s not the first, and I’m sure he won’t be the last. In all of this, my blog has become little more than an update on my progress with school, as my children are all grown and I feel very protective of them as well. Josh and I are still together- 10 years strong!- and I’m equally (if not more) protective of him too.

So really, there’s not much to report, apart from my grades and the occasional batch of pictures from my rare outings. Once my final undergrad. semester begins (in just over a week) I’ll be virtually MIA and will be devoted to only school. I’ll still keep my blog, of course, but will use it mostly for a base for my academic progress as I continue on in this life-changing journey.

I’m determined to become a prison psychologist. I can’t explain it! I feel the winds of destiny blowing gently on my face and I believe when you know you’re calling, you have a responsibility to fulfill it. Your steps toward that place depend not only on your own life, but the lives of those who you will touch along the way. In that altruistic way, I can look forward to my future with great love and excitement, knowing I’ll be making necessary changes in the world for the better.

But today, I’ll start with myself. 🙂

Josh and I are off to explore some flea markets. I’m picking up a 40 in. flat screen TV for his (belated) Christmas present. (We’re serious gamers around here.)

I hope 2016 brings loads of laughter, cheer, good-will, love, and purpose to everyone who reads this. May you always shine your light, bright and clear. x

This entry was posted on January 1, 2016 by monochromejunkie. It was filed under Uncategorized and was tagged with 2016, happy new year, new year 2016.